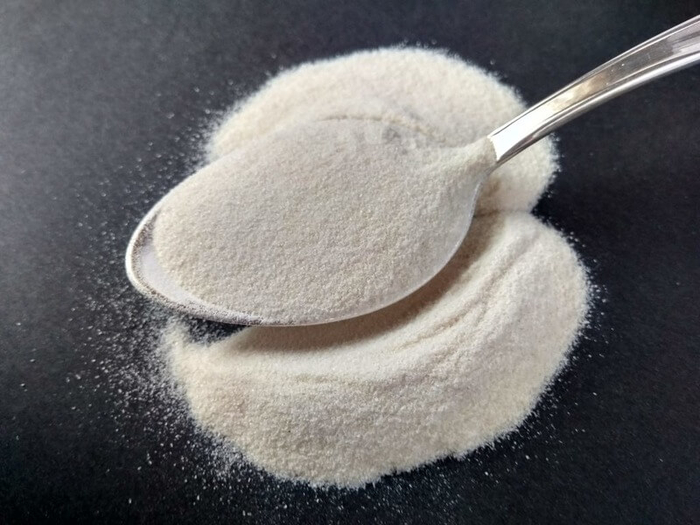 Agar is a gelatinous substance obtained from the cell walls of red algae, primarily from members of the Gelidiacae, Sphaerococcaceae and Rhodophyceae seaweed families. Commercially it may be prepared from Gelidium amansii. It can be used as a vegetarian gelatin substitute, a thickener for soups and jellies, and as a clarifying agent in brewing. None known side effects in the concentrations used. High concentrations bring about flatulence and bloating.

Agar-agar is a natural vegetable gelatin counterpart. White and semi-translucent, it is sold in packages as washed and dried strips or in powdered form. It can be used to make jellies, puddings, and custards. For making jelly, it is boiled in water until the solids dissolve. Sweetener, flavouring, colouring, fruit or vegetables are then added and the liquid is poured into molds to be served as desserts and vegetable aspics, or incorporated with other desserts, such as a jelly layer in a cake.

Agar exhibits hysteresis, melting at 85 °C (358 K, 185 °F) and solidifying from 32–40 °C (305–313 K, 90–104 °F). This property lends a suitable balance between easy melting and good gel stability at relatively high temperatures. Since many scientific applications require incubation at temperatures close to human body temperature (37 °C), agar is more appropriate than other solidifying agents that melt at this temperature, such as gelatin.